Naturism or nudism is a cultural and political movement practising, advocating and defending social nudity in private and in public. It may also refer to a lifestyle based on personal, family and/or social nudism.[1][2]

Several other terms (“social nudity“, “public nudity“, “skinny dipping”, “sunning”, and, recently, “clothes-free“) have been proposed as alternative terms for naturism, but none has found the same widespread public acceptance as the older terms “naturism” and (in much of the United States) “nudism“.

The naturist philosophy has several sources, many of which can be traced back to early 20th century health and fitness philosophies inGermany, though the concepts of returning to nature and creating equality are also cited as inspiration. From Germany the idea spread to the UK, Canada, the United States and beyond where a network of clubs developed. The model of German naturism is to promote naturist family and recreational sports, with the German Association for Free Body Culture (DFK) being a member of the German Olympic Sport Federation (DOSB). French naturism developed on the basis of large holiday complexes. This in turn influenced Quebecand the United States. A subsequent development was tourist naturism, where nudist resorts would be built to cater for the nudist tourist, without any local base. This concept is most noticeable in the Caribbean. 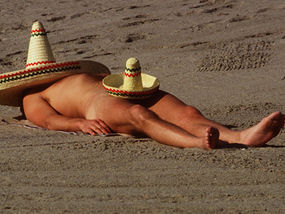 From early days, clothes-free beaches and other types of ad-hoc nudist activities have served those who wish to take part in naturist activities without belonging to any clubs. In theUK, this is termed “free-range” naturism.

Naturism can contain aspects of eroticism for some people, although many modern naturists and naturist organisations argue it need not. The lay public and the media often oversimplify this relationship.